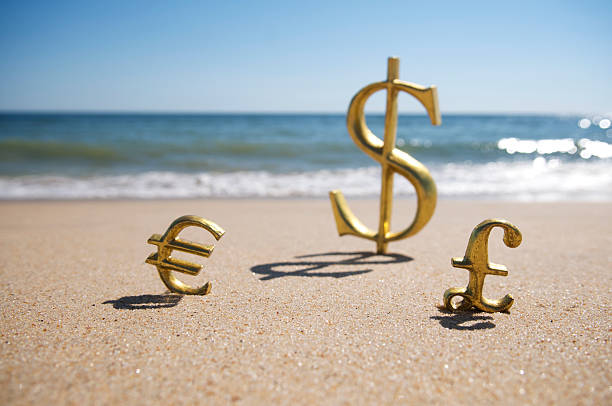 After a brief rally, risk sentiment deteriorated again towards the end of the week. Strong data out of the US that reinforces expectations of continued aggressive Fed action has been a factor. The strong rebound in oil prices also raised fears of a second wave of inflation. The overall development suggests that risk sentiment remains fragile, and a sell-off in equities and bonds ahead could give the dollar further momentum.

The dollar largely rallied towards the end of the week, but that was not enough to push it past short-term resistance levels against most major rivals. Greenback buyers were likely still on the sidelines, awaiting the next inflation data. Indeed, the Canadian dollar snagged the top spot for its resilience, while the New Zealand dollar was second only due to its earlier gains. The Swiss franc was the worst performer, followed by the euro and the pound sterling.

Comments from Fed officials last week indicate that the majority still favors continuing the pace of tightening. Their views were backed up by a strong nonfarm payroll data set. The ISM indices showed that despite some slowdown in the manufacturing sector, services remained resilient. Fed funds futures are pricing in an 81% chance of another 72 basis point rise on Nov. 2 to 3.75-4.00%, up from just 56% a week ago. The upcoming September CPI data is crucial to shore up these expectations. 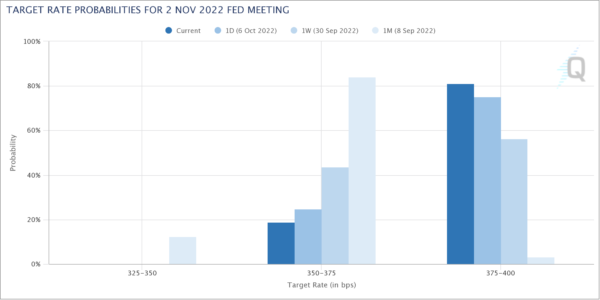 The strong rebound in the price of oil is another factor that could worry investors. OPEC+ announced its biggest supply cut since 2020. OPEC and its allies, including Russia, agreed to cut the production target by 2 million bpd, or 2% of global supply . OPEC Secretary General Haitham al-Ghais said there was “a high probability of recession occurring”, and that the decisions were “pre-emptive”. The EU has also agreed to impose a price cap on Russian oil, which will further squeeze supply.

WTI Crude Oil closed strongly at 96.97, decisively knocking out the 55-day EMA. Further upside is now in favor of a 38.2% retracement from 130.50 at 76.25 to 96.97 and possibly above. But the general market sentiment could remain relatively calm as long as it remains below the psychological level of 100.

Still, given that the correction from 130.50 may have ended with three waves down to 76.25, a decisive breakout of 100 could push WTI further to a 61.8% retracement at 109. .78, which is close to 110. If that happens, sentiment should be further dampened by the prospect of more prolonged inflation, higher terminal interest rates and longer monetary policy that remains tight. 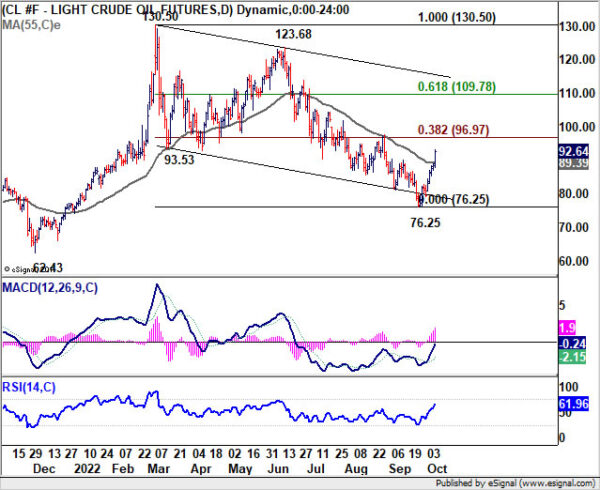 Despite a strong start, US equities reversed and pared most of the earlier gains to close on a very low note. The brief rally in the S&P 500 indicates that the outlook remains bearish and the corrective downtrend from 4818.62 may be ready to resume soon. Break of 3584.13 support will confirm and target 100% projection from 4818.62 to 3636.87 from 4325.28 to 3143.53. The strength of the downside breakout would depend on US inflation data as well as oil price developments. 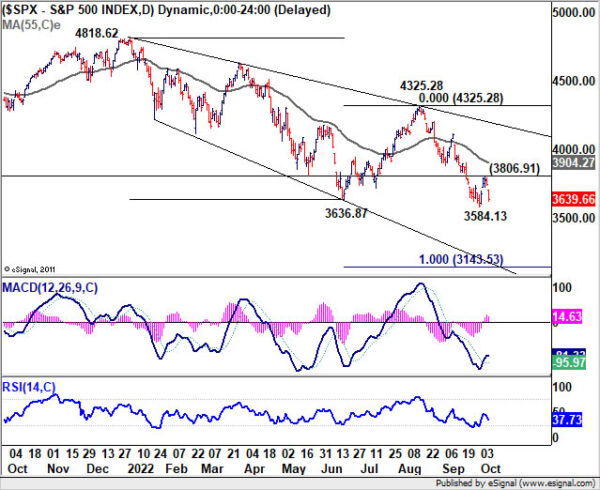 The pullback in the US 10-year yield from 3.992 may have come to an end after last week’s rebound. Such a pullback now seems more likely than a simple short-term correction. And even if there is another drop, the support facing resistance at 3.483 should provide a floor. The breakout of 3.992 will resume the uptrend through a 4% psychological level to a 100% projection from 1.343 to 3.483 to 2.525 to 4.665. Such a development, if it occurs, will confirm concerns about prolonged inflation and tightening. 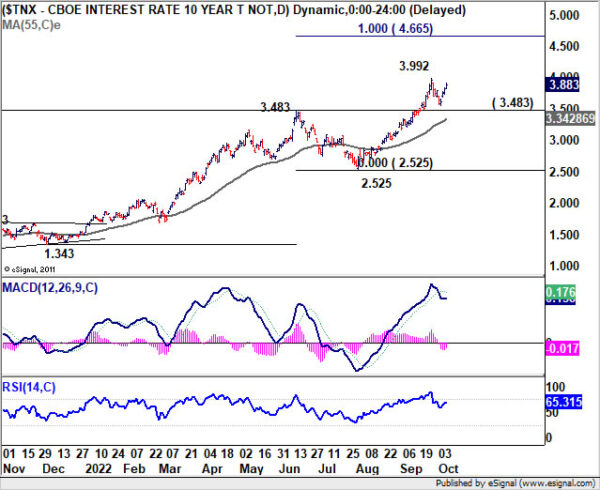 The dollar index remains bullish, but the break-up is not yet justified

The dollar’s reaction to the NFP was positive to its underlying uptrend, but somewhat disappointing. The greenback was only able to clear the recent high against the Aussie, but remained range against the others. The outlook for the Dollar Index remains clearly bullish as it holds well above the 55-day EMA (now at 109.36) as well as medium-term channel support. But the current bullish momentum does not yet warrant a breakout.

Nonetheless, in the event of further dips, strong support should be seen from the 55-day EMA to contain the decline. The breakout of 114.77 will resume a broader uptrend towards a 100% projection from 94.62 to 109.29 from 104.63 to 119.30. In this case, there is a prospect of upward acceleration if risk aversion intensifies while the 10-year yield breaks 4%. 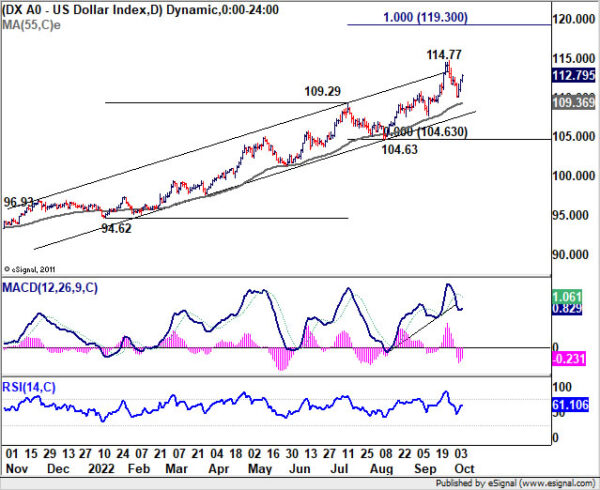 The Canadian dollar was supported by the rebound in oil prices, strong employment data, as well as hawkish comments from BoC Governor Tiff Macklem. Macklem said there is still work to be done to curb inflation and that it is too early to take a “decision by decision” approach to monetary policy. In other words, another 75 basis point hike is expected for the October 26 meeting.

On the other hand, the RBA has already started to slow down its tightening and recorded only a 25 basis point rise last week. It is likely that he will continue to lag behind the others. 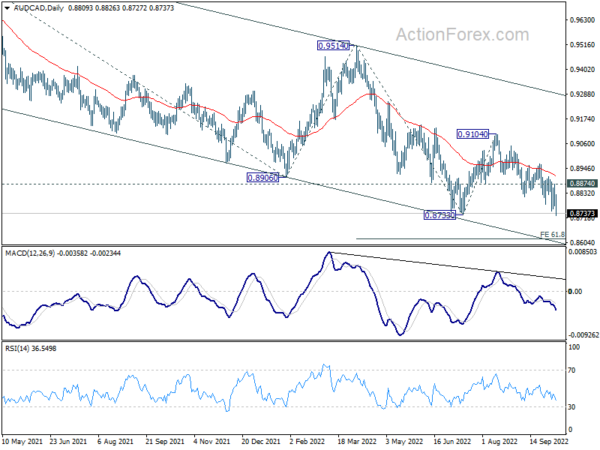 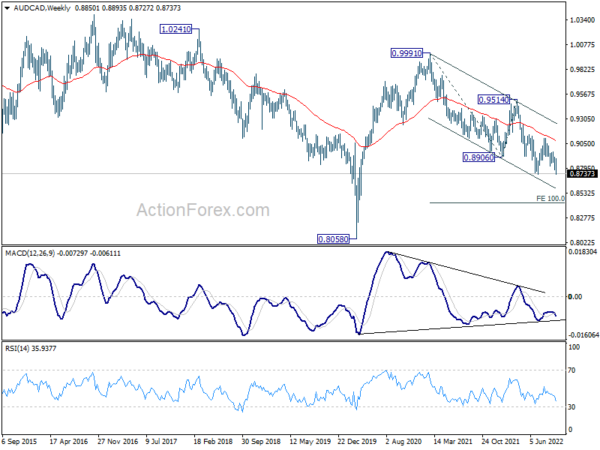 USD/CHF has remained in consolidation since 0.9964 last week and the outlook is unchanged. The initial bias remains neutral this week first. On the upside above 0.9964 rally will resume from 0.9369 to retest 1.0063 high. For now, the outlook will remain bullish as long as the support at 0.9738 holds, in case of a pullback. 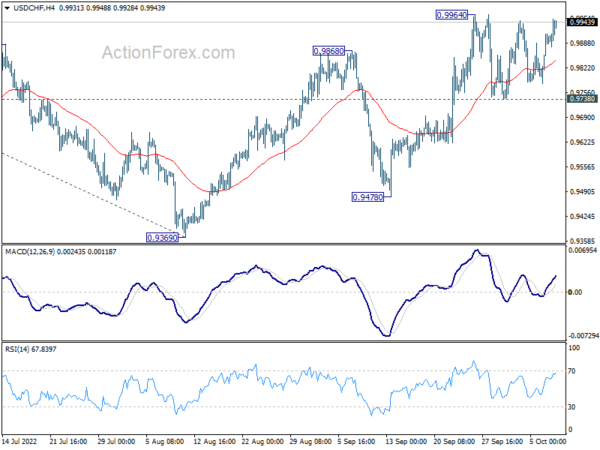 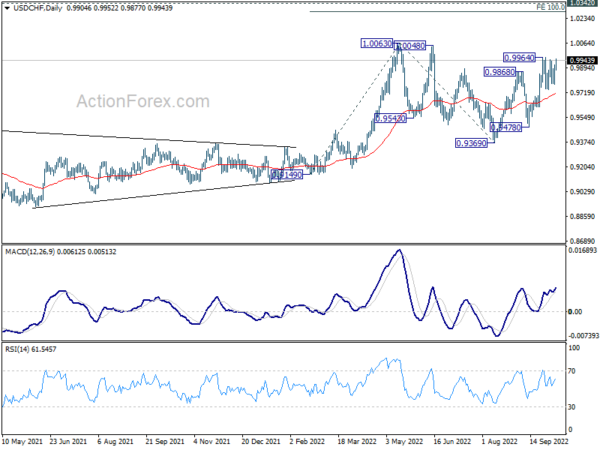 Long term, the outlook is mixed with a deeper than expected drop from 1.0063, but some support has been seen from the 55 week EMA (now at 0.9492). Overall, however, USD/CHF is seen as a sideways pattern from 1.0342 (2016 high). Range trading should continue until further development. 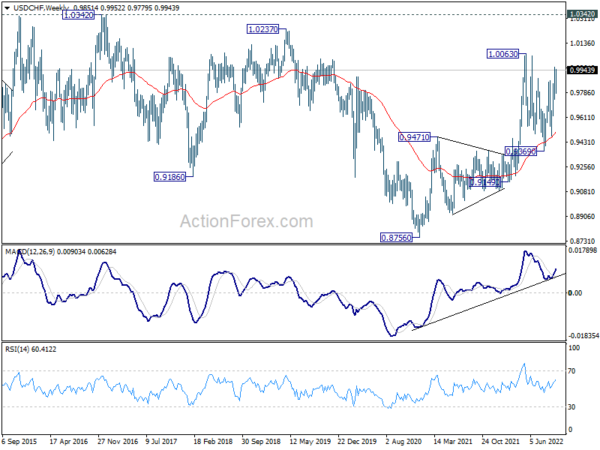 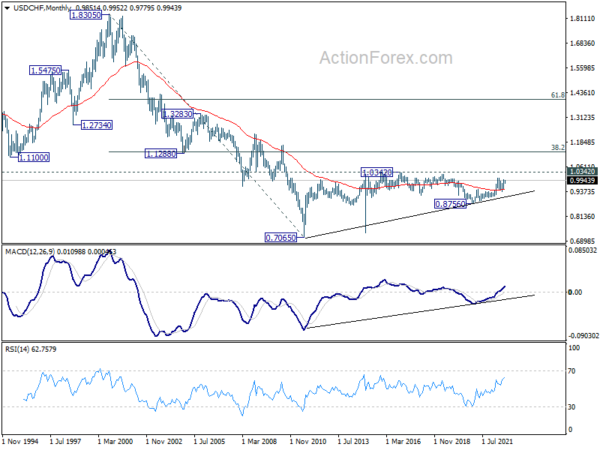