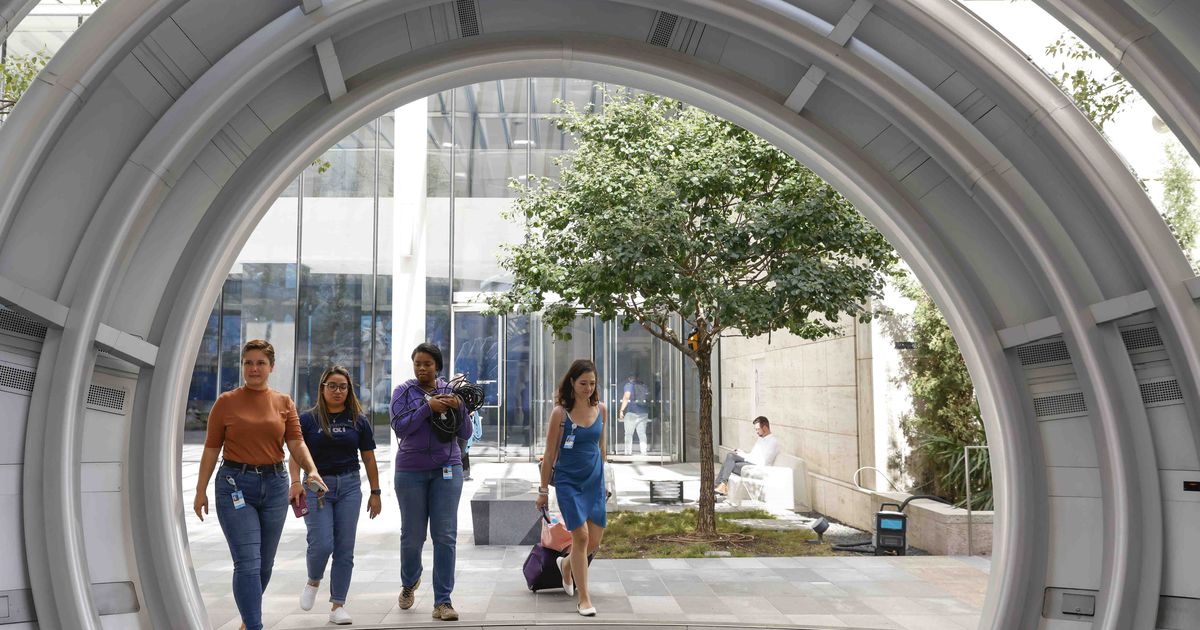 Texas’ economy slowed last month, with fewer service companies reporting an increase in revenue and more manufacturers reporting a drop in new orders, according to surveys from the Federal Reserve Bank of Dallas.

August was the third month in a row that declines in new orders outpaced increases among manufacturing companies surveyed by the Dallas Fed.

The survey results are the latest signs of a potential slowdown in the Texas economy. The state clawed back all of the jobs lost in the pandemic late last year, long before most states and the nation, and Texas has been growing ever since.

In comments to the Dallas Fed, many executives cited the impact of inflation and the ongoing challenges of the pandemic in the workplace.

“We can only charge customers such a high amount for a meal, but our costs for everything are skyrocketing,” said a restaurant executive, who added that property and liability insurance rates had increased by 130%. “It’s unsustainable.”

Overall, staff productivity remains low, said the executive of a professional and technical services firm. “We are still struggling to pick up the pace to pre-pandemic levels,” the executive said. We are “seeing a lot more leave requests and interruptions to deal with personal, family or childcare issues.”

Labor market indicators softened last month, with fewer service firms reporting an increase in hiring. And the average number of hours worked increased at the slowest rate since the start of 2021.

“We’re seeing signs of slowing, but we’re still growing,” said Dallas Fed associate economist Christopher Slijk. “Manufacturing is much weaker and there are not a lot of new orders. But the service sector is still hanging on to it.

“Nothing really suggests a recession – whether we’re in it or whether it’s necessarily on the horizon,” Slijk said.

Many companies are worried about a slowdown, and some are reducing their hiring plans or even imposing layoffs. A restaurant executive said growth had been strong at the start of the year, but sales had leveled off since June.

“Are we starting to feel the recession we are talking about? Hard to say — I hope not,” the restaurant manager told the Dallas Fed.

The steady decline in manufacturing orders could be part of a broader post-pandemic recovery. In the early months of COVID, when workers stayed home for safety reasons, they bought a lot of goods, which led to an expansion in manufacturing. As more people were vaccinated and the health threat subsided, they began to flock to services again.

“There’s really been a shift in consumer spending,” said Daniel Altman, chief economist at Instawork, a platform that matches workers with temporary assignments at restaurants, hotels and more. “It started around April. People decided they were going to go out and consume services, and we saw big pay rises for leisure and hospitality roles. fade over the last month or so.

Instawork’s Compensation Signal Index reached 63 in July for the Dallas market, indicating that most employers were raising wages to hire temporary staff. The index fell to 49 in August, suggesting a more balanced environment with some looseness in this part of the Dallas labor market.

It’s no surprise, Altman said, that consumers are starting to pull back amid rising prices and growing economic uncertainty.

“They tend to cut back on non-essential purchases,” Altman said. “These tend to be related to entertainment, dining out and hotel stays. These are some of the first things to be reduced in a downturn.”

Supply chain issues, which have persisted for much of the pandemic, appear to be easing. In August, 58.5% of respondents reported supply chain disruptions or delays. That’s down from nearly 70% in November and 65% in May, according to the Dallas Fed.

Such improvements should reduce the backlog of manufactured goods and reduce some pressure on prices, said Slijk: “If we continue to ease these supply constraints, it will grease the gears a bit so that the economy can continue to work. easier,” Slijk said.

There is also optimism for growth in the near future. More than half of service companies expect to report higher revenue in six months, compared to less than 12% who expect a decline, according to Dallas Fed surveys.

“In 2023, they’re pretty optimistic things are going to work out and be healthy,” Slijk said, noting that such expectations aren’t inconsistent with moderating the Texas economy or even creating pain in life. short term.

One of the persistent forces in the economy is the labor market. In August, businesses were still eager to hire, with those adding workers outnumbering those cutting by about 2 to 1, according to the Dallas Fed.

A hotel company said it was short by about 50 employees and was particularly challenged to fill positions in its food service department.

A professional services firm said profit margins were shrinking due to inflation, lower productivity and work disruptions due to health and child care issues: “The lack of qualified candidates and experienced continues to impede our ability to grow,” the executive said.

After Zoom meetings, social distancing and working from home, there is now a ‘silent shutdown’
Texas adds 72,800 jobs in July as economy continues to grow
Still booming: How Texas continues to attract more workers and create more jobs